Despite my book recommendation lists for the holidays, I realized I don’t often talk about what I’m reading. Which is silly, because writers are always first and foremost readers. And I do read–a LOT. I don’t always get to read as much as I’d like because I’m the mother of a tiny human, but I always make it a point to read before bed. I’m also really big on audiobooks; sometimes, the only time I have to “read” is when I’m driving in my car or walking around the grocery store (yes, I’m that weirdo who goes through the store with one earbud in). I also usually have more than one book going at a time because I’m nuts and my mood fluctuates, so here are the three books I’m reading this month:

1. A Simple Favor by Darcey Bell 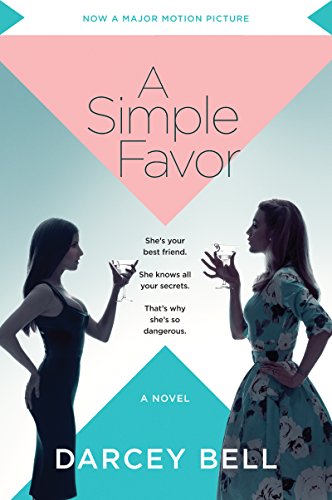 I originally heard about this book because of the movie trailer, but of course I wanted to read it before I saw the movie because how else can I sound pretentious and tell everyone “the book was better”? I just started reading this and ten pages in, I’m already completely hooked. It’s a page turner for sure and I can’t wait to see what happens next.

From the publisher: “She’s your best friend. She knows all your secrets. That’s why she’s so dangerous.

A single mother’s life is turned upside down when her best friend vanishes in this chilling debut thriller in the vein of Gone Girl and The Girl on the Train.

It starts with a simple favor—an ordinary kindness mothers do for one another. When her best friend, Emily, asks Stephanie to pick up her son Nicky after school, she happily says yes. Nicky and her son, Miles, are classmates and best friends, and the five-year-olds love being together—just like she and Emily. A widow and stay-at-home mommy blogger living in woodsy suburban Connecticut, Stephanie was lonely until she met Emily, a sophisticated PR executive whose job in Manhattan demands so much of her time.

But Emily doesn’t come back. She doesn’t answer calls or return texts. Stephanie knows something is terribly wrong—Emily would never leave Nicky, no matter what the police say. Terrified, she reaches out to her blog readers for help. She also reaches out to Emily’s husband, the handsome, reticent Sean, offering emotional support. It’s the least she can do for her best friend. Then, she and Sean receive shocking news. Emily is dead. The nightmare of her disappearance is over.

Or is it? Because soon, Stephanie will begin to see that nothing—not friendship, love, or even an ordinary favor—is as simple as it seems.”

2. The Handmaid’s Tale by Margaret Atwood

I re-read this book at least once a year and I’m due for another round. Not only do I love Margaret Atwood, but this book is, I think, incredibly important considering our current political climate. It should be required reading for everyone. As a bonus, I love the Hulu series adaptation of this book. It stays true to the source material while expanding the universe Atwood created (it doesn’t hurt that Atwood is a producer on the show and has worked closely with Elizabeth Moss and the show runners). Anyone else excited for season three in April?

From the publisher: “The Handmaid’s Tale is a novel of such power that the reader will be unable to forget its images and its forecast. Set in the near future, it describes life in what was once the United States and is now called the Republic of Gilead, a monotheocracy that has reacted to social unrest and a sharply declining birthrate by reverting to, and going beyond, the repressive intolerance of the original Puritans. The regime takes the Book of Genesis absolutely at its word, with bizarre consequences for the women and men in its population.

The story is told through the eyes of Offred, one of the unfortunate Handmaids under the new social order. In condensed but eloquent prose, by turns cool-eyed, tender, despairing, passionate, and wry, she reveals to us the dark corners behind the establishment’s calm facade, as certain tendencies now in existence are carried to their logical conclusions. The Handmaid’s Tale is funny, unexpected, horrifying, and altogether convincing. It is at once scathing satire, dire warning, and a tour de force. It is Margaret Atwood at her best.”

3. The Particular Sadness of Lemon Cake by Aimee Bender

I recently read Aimee Bender’s short story collection The Girl with the Flammable Skirt and although it confused the bejeezus out of me the first time I read it, I loved Bender’s dark and whimsical writing style so I’m excited to see what her novel is like.

From the publisher: “On the eve of her ninth birthday, unassuming Rose Edelstein, a girl at the periphery of schoolyard games and her distracted parents’ attention, bites into her mother’s homemade lemon-chocolate cake and discovers she has a magical gift: she can taste her mother’s emotions in the cake. She discovers this gift to her horror, for her mother—her cheerful, good-with-crafts, can-do mother—tastes of despair and desperation. Suddenly, and for the rest of her life, food becomes a peril and a threat to Rose.

The curse her gift has bestowed is the secret knowledge all families keep hidden—her mother’s life outside the home, her father’s detachment, her brother’s clash with the world. Yet as Rose grows up she learns to harness her gift and becomes aware that there are secrets even her taste buds cannot discern.”

What are you reading this month? Have you read anything on my list? Let me know in the comments!