Those of you who follow me on Instagram know that my Saturday plans were foiled by our car breaking down on the side of the freeway. Luckily, we were able to get a tow back to town and drop the car at the mechanic. We’re still waiting for a call, but on Sunday, with nothing to do but wait, I decided to take the day off and do something I love: read.

Are you surprised? You shouldn’t be surprised.

I’ve heard a lot of hype about the new show You on Netflix and, of course, before I watch it, I wanted to read the book.

WARNING: THIS POST CONTAINS SPOILERS!
READ AHEAD AT YOUR OWN RISK!

From the first page, I immediately fell in love with Caroline Kepnes’s You. I don’t often enjoy reading a second person narrative, but this one worked really well. Because Joe Goldberg is a stalker (and serial killer, more on that later), it makes sense for the second person voice because his whole world becomes about Beck.

I’m a huge fan of unreliable narrators–if they’re done well. You is one such book where I feel this is done extremely well. You, the reader, can never fully trust what Joe is telling you because you know he’s a little wonky in the head. His perception of a situation is colored by his dangerous psychosis so the reader is never quite sure if he’s accurately assessing the situation. However, you do know that he’s always being truthful–but truth is a malleable idea in You.

What I liked best about this book is that Caroline Kepnes created the character of Joe Goldberg so well that I found myself (very uncomfortably) rooting for him at various parts of the story. I had to keep actively reminding myself that Joe is a stalker and serial killer and no, I shouldn’t be worried that Beck is going to find his stashes of her stuff all over his apartment when she shows up unexpectedly for the first time–I should be screaming, “BECK, GTFO OF THAT PSYCHO’S APARTMENT! RUN AWAY!” It’s possible to relate Joe to a character like Dexter, but Dexter at least killed serial killers–you can get on board with a kind of honor code like that. Joe, on the other hand, simply “removes obstacles” if they get in his way.

Beck’s fate was sealed from page one, so I wasn’t surprised that she died. Sure, I hoped that she would be able to escape the book store while Joe was in the bathroom with the loud fan, but I knew it was a false hope. Joe is the kind of guy who captures a butterfly and crushes its wings or pins it to a board. He loves the idea of the butterfly more than the butterfly itself.

There were several times when Joe was a bit sloppy in his quest to capture Beck, but I loved that he got away with everything at the end of the book, seemingly ready to move onto his next victim, Amy Adam. So many stories have a happily ever after ending and there justice rains down on the wicked, and although this isn’t a new idea, I still find it refreshing. It’s like the ending of A Simple Favor by Darcey Bell (*SPOILERS*). I love that Emily gets away with everything and manages to frame both Sean and Stephanie. There’s a perverse satisfaction in watching the bad guy win in fiction. That’s how I felt about Joe in You. Every story is about the hero’s journey and in You, the hero, or anti-hero, is Joe. Joe successfully completes his journey and is back in the book store, complimenting a beautiful woman’s book purchases. It’s sick, but I loved it.

In fact, I loved this book so much that I was THRILLED to find out there was a sequel, Hidden Bodies. I downloaded it to my Kindle immediately (Joe would be so disappointed I use a Kindle), and . . .

. . . I’m not gonna lie, I was fairly disappointed in this book. I was pleased with the dark, sinister tone and ending of You and, for me, Hidden Bodies fell flat. We lose that engaging second person narrative and it switches to first person. Joe is still a serial killer and he ramps up his body count in this book, but this story felt more like an attempt at a redemptive arc for Joe rather than a peek into something dark and disturbing. 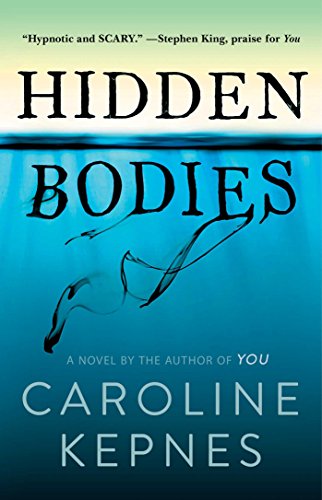 At first, I was optimistic. I liked the idea that Amy Adam played him and stole a bunch of rare books and that this time, Joe’s stalking would be motivated by revenge, not “love.” However, Joe loses that single-minded focus that I found so engaging in the first book and is so easily distracted by everything shiny in Los Angeles.

Amy quickly fades to the background and Joe’s quest becomes more about self-preservation as he tries to move into this new Hollywood life he decided he wants, which feels ironic to me considering that his girlfriend’s brother, Forty, is essentially Benji but dumber.

While I understand Joe’s fixation on the mug of urine he left behind in the Salinger house in You, I was a little disappointed in Joe. Urine doesn’t really hold much DNA so I doubt that would’ve been a huge help to the investigation into Peach’s death. I know Joe doesn’t have much formal education, but he’s smart enough to where I would’ve expected him to do some research about how viable urine is for DNA.

The one thing I really did like about Hidden Bodies was the commentary at the end. Sure, Joe was arrested under suspicion for Beck and Peach’s murders, but the implication is pretty strong that he’s going to get off and not be held accountable for his crimes. He’s a white man and, because of his pregnant girlfriend, he’s now a rich white man. Joe gets to turn his life around and leave behind this wilting daisy chain of hidden bodies with virtually no consequences. If that isn’t a commentary on our current judicial system, I don’t know what is.

Have you read these books? What did you think? Let me know in the comments!

Both You and Hidden Bodies are available from Amazon.

5 thoughts on “Book Review: “You” and “Hidden Bodies” by Caroline Kepnes”