I know I’ve been slacking on these posts, but depression is a bitch and doesn’t like to let me do things like write blog posts or function like a normal human being. However, I’m slowly crawling my way out of the hole I’ve been in and I wanted to do a football post during this last weekend of regular season games and do a wrap up of my fantasy season.

In my first league, I made it to the playoffs but I was knocked out of contention by my darling husband who is, thankfully, a much more graceful winner than I am.

This loss was due in part to the triumphant return of Josh Gordon to the NFL as well as to Rob Gronkowski being suspended that week after body slamming Tre’Davious White like they were in the WWE instead of the NFL.  Maybe Gronk forgot that he’s a professional football player and wasn’t just playing with his brothers in the backyard? I mean, no one has ever accused him of being smart.

In this league, I had a roller coaster of a season and had already written off my team. However, it seemed like everyone else had also had a garbage season, so by some freak accident, I not only ended up in the playoffs, but I came in second overall. I actually had a shot at first place, but my opponent had Todd Gurley, so those hopes and dreams came to a screeching halt. 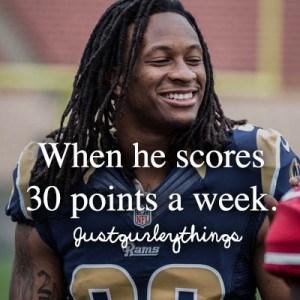 Still, I was pretty happy to come in second place considering it was my first year in this particular league. It’s the highest I’ve ever finished in fantasy football, so I’ll take it.

Thank God this garbage fire of a season is finally limping to a close. It was so bad that for the first time in years, I couldn’t even talk trash to my friend Matt, a devoted Chargers fan. Proving that he is the bigger person, he was kind enough to not rub this season in my face the way I would have done to him.

Trevor Siemian was finally reinstated as quarterback, only to have his shoulder dislocated from a hard hit during the game against the Colts. Our offensive line is complete garbage, it has been for years, and that, combined with terrible coaching, has resulted in a losing season. I also heard reports that Trevor was completely dicked over by the coaching staff because they were calling plays Trevor and the rest of the offense had never run in practice.

In terms of our other quarterbacks, Brock Lobster has been doing okay, but the Broncos still seem hellbent on putting in Paxton Lynch.

At the end of the day though, it seems like Paxton just isn’t good enough. He has a lot of raw talent and potential, but he doesn’t seem to be getting any better. Could this be due to all of his injuries? Maybe, maybe not. But at this point, it seems like John Elway is just trying to save face and validate his choice to trade up in the first round to steal Paxton from the Cowboys during the draft. Then, while John Elway is trying to salvage his pride, the Broncos are paying the price. Von Miller wasted one of the prime years of his playing career this year and Jamaal Charles asked to be released because we barely played him this year, choosing instead to highlight Devontae Booker for some fucking reason. Isaiah McKenzie keeps returning kicks despite a continually shoddy performance while Jordan Taylor is grossly underutilized.

I’m keeping my fingers crossed that Vance Joseph is out and we’ll get a new head coach, but I have this awful feeling we’re stuck with him for at least another year. There are a couple rumors swirling around that he’s going to go today, on Black Monday, but I doubt it. Maybe I’ll get to write a correction on this post though–a girl can dream!

There are also rumors that Gary Kubiak is going to have an expanded role with the Broncos next year. Not back up to head coach (although I’d love to have him back), but maybe he’ll be able to temper John Elway a little bit, at least when it comes to this insane insistence on proving he made the right picks despite the fact that Paxton Lynch just hasn’t panned out as expected.

Looking ahead at the playoffs, I think the Eagles are a real contender this year. I would’ve said they were a shoe in before Carson Wentz got hurt, but Nick Foles is decent enough and I think they could still take home a ring. Really, I’d root for just about anyone at this point as long as the Patriots don’t win.

Happy football, everyone. See you next year when I’ll pretend this season never happened.

← Thank You, Thank You
Finding Your Niche →